The mythological diety Lugh in pagan tradition, was revered in earlier times by the tribes of Luighne & Gaileanga. Later christian monastic involvements indicate thier reverence for St Ciaran of Clonmacnoise, with Foirchealach of Fobher (Fore) recorded as the Abbot of Cluain Mec Nois in 809 AD, one of the Gaileanga Mora.

The Well of St Ciaran (pictured above) was located in this ancient territory inhabited by the Luighne & Gaileanga, along with the recently unearthed (2006) Ogham  Stone of Lugh found in the Keim graveyard,  a former monastic site referenced in early annals as Belach Duin.

The ogham script on the stone translates as: Cuan son of the tribe of Luighni.

These combined cultural elements represent mythological, historic and monastic lineages of the tribes of the Luighne and Gaileanga, from which Maoláin circa1017 AD, descended.

Maoláin's father Eichnigh is recorded as King of the Luighne 993 AD and his line connects back to Cuan.

Descendant  chieftains are recorded in the annals by forename and surname to Mac Maoláin lord of the Gaileanga Brega d.1144 AD.

Ogham comprises a set of twenty or so letters of the Latin alphabet, transcribed into incisions and notches made on the corner edge of a quarried slab of stone. A key to its translation was discovered in a medieval religious text. This marked the first time that Irish was written down. Using this translation key, it is possible to read the Ogham script, from the bottom of the stone up.

Most scripts conform to a pattern incorporating genealogical descent - for example (in Latin) "X son of Y" and other social elements such as "of the tribe Z". As such, they are frequently described as 'grave markers', although no evidence (eg: associated burials) of this function has been found by archaeologists. They may be commemorative, even in the absence of burials, or they may have been used as boundary markers.

Archaeologists place Ogham Stones in the date-range of somewhere between the 4th to the 8th centuries AD. What is significant about them is that they are testimony of the arrival of the use of Latin, spread by the Roman Empire as far as Great Britain, and via cultural exchange in Ireland. They show that Irish and Latin existed side by side, probably only in religious establishments such as monasteries, at the time of the emergence of Christianity in Ireland. These stones span the period of conversion to Christianity. Those with Christian associations are the earliest evidence of Christianity in Ireland.

The name Ogham is derived from Oghma, the Celtic God of elocution. Ogham probably originated and was certainly most predominant in South and Southwestern Ireland, areas which remained the focal point for it to the end.  Finding this stone here adds some additional credence to the general historical conclusion that Gaileanga and Luighne tribes originated much earlier amongst Leinster population areas, carried these techniques with them to Mide and Brega.

As explained in many historic documents, the early church located exactly here was dedicated to St Ciaran, then later appropriate to the Priory of St John the Baptist of Kells. There are some interesting remains in the yard itself, including three Termon Crosses, with a fourth located in the river nearby. (Legend has it Columcille of Kells exiled later to Iona dropped it there when discovered by St Ciaran taking it to the Kells monastic site)

An ancient christian "celtic cross slab symbol" is also found in the gravesite.

Modern leadership of Clan Mac Maolain respect both traditions represented in this site, the Celtic pagan tradition of the Stone of Lugh and christian traditions of St Ciaran, plus link to Kells monastic site, Gille Columm (alumnus of Columcille) circa 800-1200 AD.

For that reason, Bealaig Ciaran alias "Belach Duin" is adopted as our Clan inauguration site for any successive "Clan Taoiseach" as it combines the physical and locational elements representative of both traditions 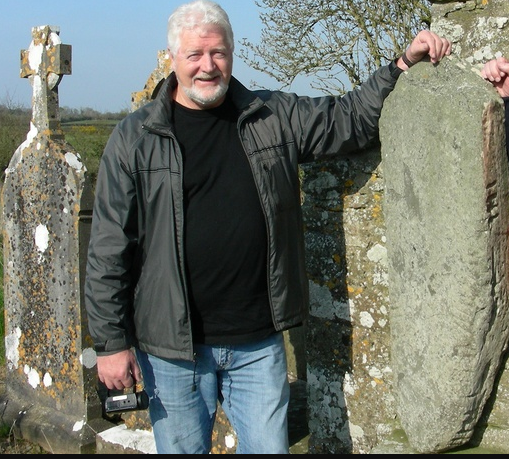