Origins of the surname "Mac Maoláin" 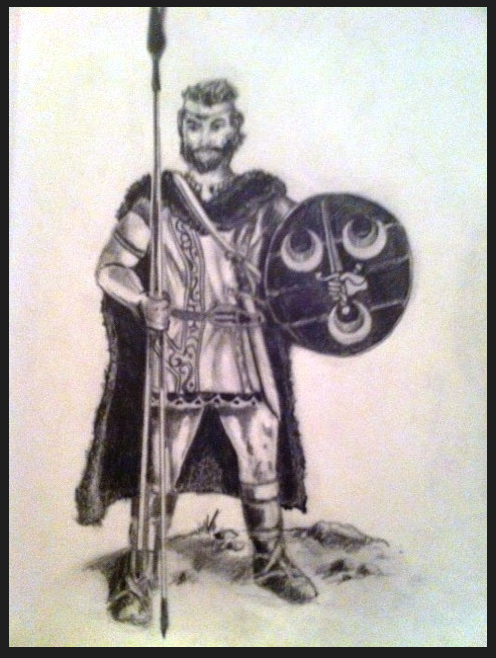 Mac Maoláin as a surname evolved from the old Irish Gaelic root form "Maelan", a forename in use circa  700-900 AD.

All of these variants are verified in numerous Irish "annals", with entries spanning hundreds of years.

A less certain possibility predating the written monastic entries, is found in translation of an Ogham narrative cut into the Aghascrebagh Standing Stone found in Co,  Tyrone.

One of the very few Ogham stones in the north of Ireland, it was almost certainly a standing stone before the Ogham script was cut into it.

Standing 1.2 metres high, the stone itself appears to be from about 500AD, the much worn inscription interpreted as Dottetto Maqi Maglani.

MAQI according to ogham experts analyzing this stone, was an earliest form of Mac=son of, leaving some convinced this might be referencing an individual who was a son of Maelan 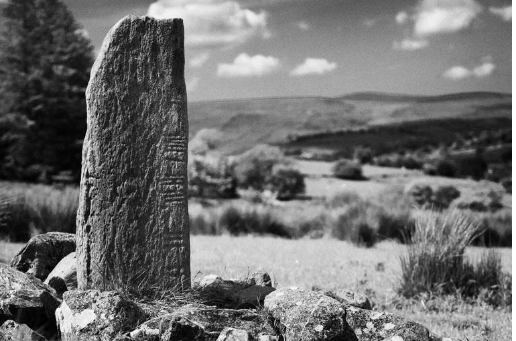 These "original forename variants" eventually became anglicized in the modern era as the surnames Mullan/Mullen/Mullin and "son of"= MacMullan, MacMullen, MacMullin and MacMoylan.

Later they were shortened to the more common variants in use of McMullan, McMullen, McMullin and McMoylan.

1.Ancient Irish townland's established in the locales these families inhabited;

3. Specific hand written notes found in the charter section of the "Book of Kells"; and

These diverse resources highlight the factual reality, that several unrelated families adopted this forename as their familie (clan) surname in Ireland.

More importantly the diversity exposes the simplistic research efforts adopted by consumer crest marketing companies, who cobble together questionable analysis about a specific surname and where it first emerged (based on who they are marketing). These outdated descriptions remain static, ignoring the vast amounts of modern updated database research input even when that information is provided to them as evidence.

The chiefly forenames Maelán, Maolán, Maoláin, Meallain and collateral medieval surname of Mac Maoláin (son of), surface in terms of historic identification, in some of the very earliest locational listings of affiliated populations and dynastic tribal clusters identified in Irish historical research.

Extracts from these ancient texts, with references to a significant chieftain, and the later use of his forename to identify a family grouping can be found sequentially:

* In the early chiefly families of Ui Bairrche which included their mercenary allies the fianna of  Clanna Rory (the Laighsi);

*In the genelach (pedigree) of the Luighne/Gaileanga alliance of Mide and Brega (modern counties of Westmeath and Meath).

Territorial dynasties emerging over periods in excess of several thousand years, were constantly reshaped by conquest and defeat. This would produce several diverse variants of the original forename Maelan, recorded in different locations, for clearly unrelated families (clan/sept)

It was monastic occupational records and the variant form selected by scribes for individuals recorded in them, which contributed to the later more frequent transcribed selection of the tonsured form (Maolain= bald) versus original Maelan (=of the hillock or height) to identify individuals of this forename.

Tracking ancient pedigree's and territorial population groups where a prominent individual named Maelan & Mc surfaced,  will confirm as mentioned, that several different cultural and topographic tribal clusters and tributary relationships are linked to it.

Where tribal references appear in ancient historic renderings, they often include mention of ancient pagan dieties, such as Lugh, Nauda and the mystic Tauth De Dannan.

Irish Genealogical Society's history of Clanna-Rory, identifying the seat of MacMullen on page 16 and the migration of Fergus Gaileang to "Teffia" (modern day Westmeath) on page 86;

Ethnology of the Gael  project by  C. Thomas Cairney, listing  O'Mullan on pages 78, 82 and 87, with a suggested descent from the earlier families of Cahair Mor and the Laigin.

O'Hart "Irish Pedigrees" (Origin and Stem of the Irish Nation) with a  suggested descent from a Connor brother of Dathi (#102 on the Concannon pedigree), his son Donall, his son Maolan, and also suggestive of earlier Laigin origins.

O’Growney, in his monastic research provides examples of sites connected to early ecclesiastic tradition and use of the forename variant Maelán (Daire Maelain Fermanagh, Cell Maelain Limerick and Killmoylan Galway).

Widely dispersed ecclesiatic sites where a variant has emerged include several in county Laois, one of which may have been according to the O’Growney research conclusions, the very 1st to house a monastic given the forename of Maelan:

These different pedigrees and topographic suggestions verify as modern genetic studies have, that several separate families in different locales, adopted this chiefly forename as their surname over many centuries.

Most modern historians wisely caution that ancient pedigrees should be read with the view of topographic alliances versus agnatic descent (e.g. the Ui Bairche/Laighsi cluster) as chiefly families were tacked on to dynastic pedigree's to ensure participation in the Brehon competition for tigernach=king or territorial lord.

Generally antiquarians consider ancient pedigree's as only becoming completely reliable from about the 9th century onward, due to the constant shifts in the dynastic affiliations of earlier times.

Many families (clan/sept) now present a pedigree that was either assigned, or in some cases a false/corrupted version, but carried forward to modern times.

Below are listed ancient pedigrees found back on recorded Irish evolutionary pathways where a prominent male forename in that particular territorial cluster, might have later spawned a clan surname of Mullan, Mullen, McMullen. (note three of them suggest common descent from a Munster Ailella Auluimm)

The 1st family recorded with the surname "Mac Maoláin" emerged in annalistic records of a ruling family, early 10th and 11th century.

They are identified as associated at that time with the Mide & Brega tribal clusters of Luighne and Gaileanga, and being tributary to the Ard Ri (High King) family of Mael Seachlain (Southern Ui Neill):

Notices are found in diverse Irish Annals relating to this family Maelan, Maoláin, Mic Maolain, identifying them as of the Gaileanga and Luighne, and identifying the tribal clusters they were aligned with.

In addition these sources verify their ecclesiastic links to the monastic site of Kells (Ceannanus) and "Alumnus of Columcille", during the period when Kells was the primacy (head of the monastic branch and sites in Ireland and Scotland). 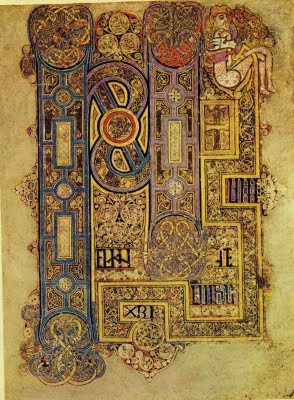 Sequential annals, reveal their wider involvement with these tribal elements both in the conflicts of that era and the monastic communities. In short our ancestors were a warrior class but simular to all ruling families, also had relatives who were part of monastic orders.

847 "The demolition of the island of Loch Muinreamhair by Maelseachlainn, son of Maelruanaidh against a crowd of 'sons of death' of the Luigni and Gailenga who were plundering the districts at the instigation of the foreigners (Norsemen) and they were destroyed by him."

848, Maelan, son of Cathmogha, lord of Ui Briuin of South Connaught, was slain by the foreigners.

855, Maeleona son of Olbrann, one of the Luighni of Connacht, Lector of Cluain Mic Nois, died.

929, Maeleoin, bishop and anchorite of Ath-Truim, died,, after a good life.

978, The battle of Teamhair was gained by Maelseachlainn, son of Domhnall, over the foreigners of Ath-cliath and of the Islands, and over the sons of Amhlaeibh in particular, where many were slain, together with Raghnall, son of Amhlaeibh, heir to the sovereignty of the foreigners; Conamhail, son of Gilla-Arri; and the orator of Ath-cliath; and a dreadful slaughter of the foreigners along with them. There fell also in the heat of the battle Braen, son of Murchadh, royal heir of Leinster; Conghalach, son of Flann, lord of Gaileanga, and his son, i.e. Maelan; Fiachna and Cuduilich, the two sons of Dubhlaech, two lords of Feara Tulach; and Lachtnan, lord of Mughdhorn-Maighen. After this Amhlaeibh went across the sea, and died at I-Coluim-Cille.

991,  The Fox, grandson of Leochain, King of the Gaileanga, died.

1048, Aedh, son of Maelan Ua Nuadhait, airchinneach of Sord, was killed on the night of the Friday of protection before Easter, in the middle of Sord.

1050, Maelan, lector of Ceanannus, who was a distinquished sage; died.

1051, Laidcnen, son of Maelan Ua Leocain, lord of Gaileanga, and his wife, the daughter of the Gott O'Maeleachlainn, went on a pilgrimage to Rome; and they died in the east, on their return from Rome.

1077, the grandson of Maelan, king of Gaileanga, was killed by Mael Sechlainn king of Temair.

1127, Gillachrist Ua Maeleoin, abbot, successor of Ciaran of Cluain-mic-nois, fountain of the wisdom, the ornament, and magnificence of Leath-Chuinn and head of the prosperity and affluence of Ireland, died.

1134, Maelciarain, a son of Cormac, a noble priest, prop of piety and wisdom, noble head of CLuain-mic-nois, died on MIchaelmas NIght, and it was in Imdhaigh Chiarain he died. Mael Ciaran ( a quo muinter Maelán).

A Chieftain forename Lorcan or Leochain  (Larkin or Loughan, Logane, Lohan) circa 10th Century, is identified in the Irish Annals as the Lord of the Luighne/Gaileanga of Mide, Cavan and Brega.

Lynan became  the king of the Luighne/Gaileanga Mora in 1037AD. He married the daughter of the Gott  king of Uisneach=Westmeath Southern Ui Neill (the Gott was the son of  the Ard Ri Conchhubar Maelseachlain)

Lynan was recorded in the charters to the "Book of Kells"as both laity (alumnus of Kells) and  a witness to the freedom of Kildalkey (land transfers to the church of Columcille (circa 1025-40 AD) by Conchubar Maelseachlain.

His brother Maelan d.1050, was a lector in the monastic site of Ceanannus (Kells), dedicated to and at that time the primacy of the kin of Columcille.

Lynan and his wife died 1051, in the east returning from a  pilgramage to Rome. His son was elected successor as lord of the Gaileanga (but not of the Luighne) and is 1st recorded in 1060AD as:

Territorial references are no longer used by scribes from this point forward. Subsequent entries attach the verbal identifiers of mic, maic and Mic Maoláin, verifying the collateral evolution based on marriage to royalty (Southern Ui Neill (the Got) Clann Cholmain) of this surname and family of Mac Maoláin, tigherna Gaileang Breagh slain 1144AD.

Authors note: Locales of Mide and Brega during the dynastic era of Clann Cholmain and Sil nAedo Slaine (the Mael Seachlain kings of Mide and Tara (Brega) are illustrated on the map below. When reading the annals, this clarifies that the modern day county of Meath (Irish Mide) was then referenced as Brega, and Westmeath referenced as Mide (Meath).